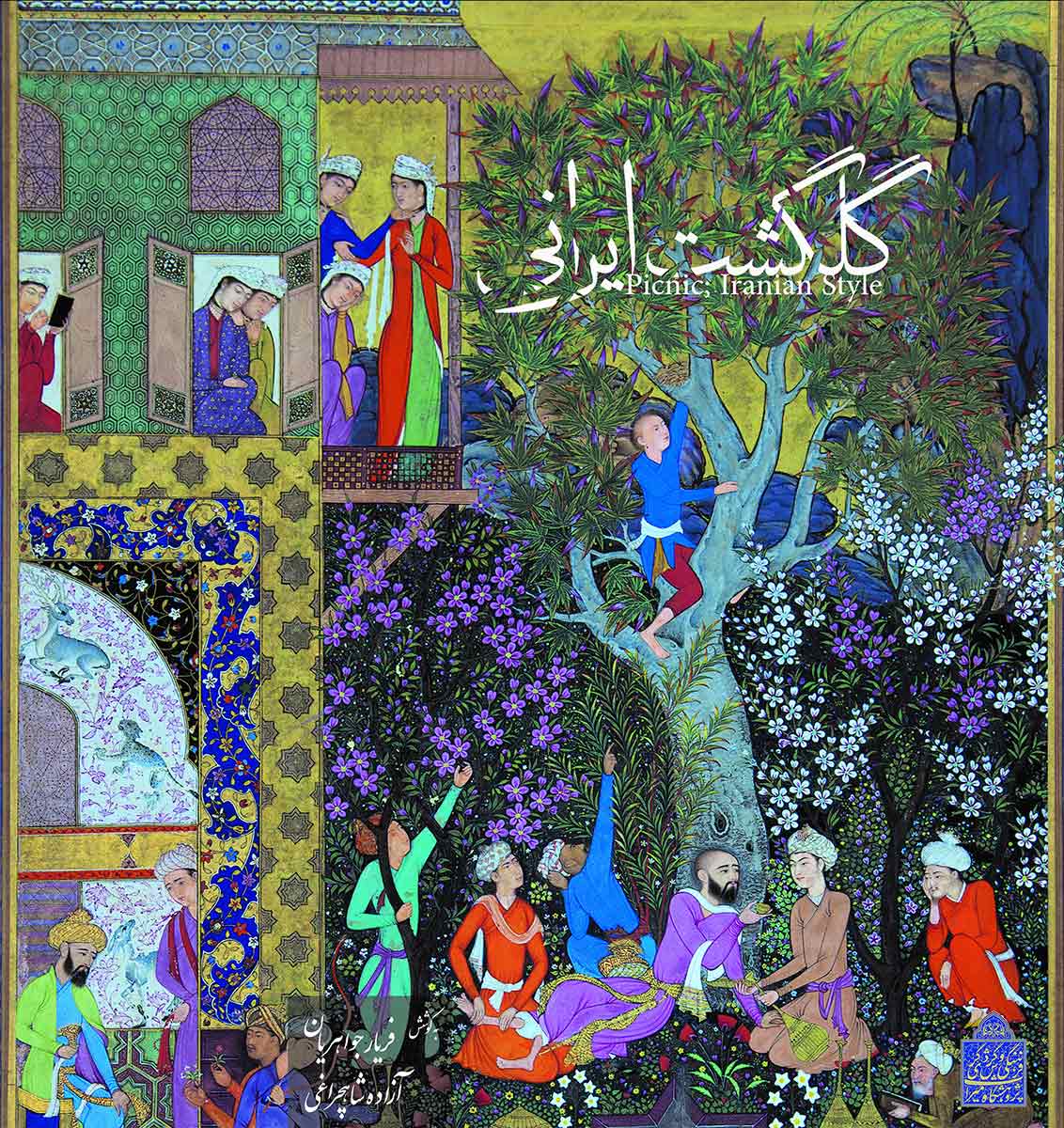 When I curated the GARDENS OF IRAN exhibition 13 years earlier, I was dead sure that the “soul” of the Iranian people is embedded in our garden, but at the time of this exhibition I became convinced that, as a hedonistic nation, our soul is more ingrained in our picnic rituals. The picnic encompasses the garden paradigm and is based on our love of nature and our close relationship to it.

As in the Garden exhibition, the Picnic exhibition is divided in two parts: the historical and the contemporary. And just like the Garden exhibition I first asked Abbas Kiarostami if he would accept to participate in it: he loved it and advised me not to talk too much about this exhibition to other people lest they would steal the idea from me! A few weeks later he told me what he would like to do for it, but alas life did not allow us to collaborate on this project: he passed away…

I chose the Golestan Palace because it has a rich collection of Persian miniatures depicting picnics, namely the Morragha e Golshan series, and because the palace itself is the setting of a lavish picnicky lifestyle of the Qajar kings. Many of the miniatures in the exhibition were never seen before, as well as many of the carpets displayed in the “chadorkhaneh” which was the building dedicated to Nasser al Din’s tents, denoting how much he was in love with traveling and picnicking.

Eating in the open air is a ritual engrained in Iranian culture – a tradition that dates back 3000 years from the practives of Sizdehbedar and lavish picnics prepared by gholams for kingsn to ordinary folk’s love of eating in nature. The picnic itself is related to the Persian garden, which is iften the backdrop for these feasts, a plae of symbolic importance in the Iranian imagination, embodying their love and enjoyment of the natural world.
This exhibition is unique in that it addressesfor the firt time, from a historical, artistic and scientific angle, the lnog tradition of picnicking in Persian culture, a tradition that is documented in various artistic productions, such as ceramic tiles, miniatures, textiles and carpets, various handicrafts and photographs, all amply shown here.
The Golestan Palace is the quintessential Palace of pleasures of the Qajars and the best enbodiment of Picnic culture. In 1554 when Shah Tahmasb visited Tehran for the first time, he found the village so pleasant that he decided to have a palace built here. This was to become the nucleous of the citadel of Tehran – Arg – and the first building of the Golestan complex. There is no remnant from this Safavid palace, except maybe some of the sycamore trees in the Safavid enclosure. The complex grew during the Zand Dynasty but flourished most under the Qajars to reach its present dimensions. This is a five-century old complex registered as a World Heritage Site of Unesco in 2013.
This exhibition comes at a critical moment when Iran is opening up to the rest of the world after three decades of isolation : artistic and cultural exchanges are at the forefront of diplomacy. By intagrating the cultural and artistic products of centuries long past with works of contemporary art, this exhibition can offer a richer lens into Iranian culture, building a more complex picture of its connection to the world at large, and show who the Persians were and who the Iranians are, through ther prism of art, culture and literacy narratives.
This exhibition begins in the the Shams-ol-Emareh building, with historical objects, which mainly consist of miniature paintings and ceramic tiles, to immerse the visitor in the enduring importance of Picnics in Persian art history. The contemporary works then follow in the Khorshid-Kolah building. The video-art works and the photography exhibit are shown in the basement od the Badgir building, the akskhaneh and comprise different sections: historic photographs from Nasseri Albums, contemporary artists, and a large portion are devoted to the miniatures. All the elements in the miniature paintings are decomposed and digitally reproduced in large scale to show the flowers, plants and trees, the animals, the utensils, the instruments, the tents, textiles and carpets, and other accessories. A chance for the visitor to have an artistic experience of the Iranian Picnic.

The catalogue was designed by Arash Manouchehri and printed in Farsi only in Iran.