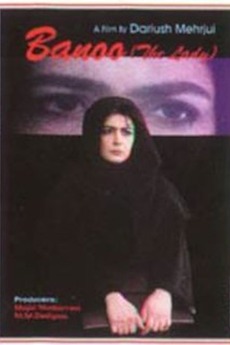 Banou was compared to Bunuel’s Viridiana; many scenes were censored and the film was finally released after nine years. It was mostly shot in one mansion and garden, belonging to Cyrus Samrad, one of the main developers of Iran before the Revolution and a friend of the Shah. The building now houses the Museum of Music, but at that time, it was occupied by several war-stricken families from Abadan who had migrated to Tehran. The architecture of the building was quite majestic, but because so many people lived in the various wings, it was very difficult to constantly move them around, shoot the scenes and then allow them to come back and live their lives.

Banou – The Lady – is a story of betrayal from many different angles: the Lady of the house first discovers that her husband is betraying her, then all of the servants… The scenario was based on a true story happening to me: we had an old gardener whose wife was very sick and I would often take her to the hospital for care, but she was so self-indulgent that not only she never thanked me but would expect more and more… As with all the films I made with Dariush, it was a family affair, borrowing furniture and accessories from our family members and friends, using our daughter’s cat, Pishka, cooking meals for the whole crew… We worked with Touraj Mansouri for the second time and our understanding of effects to achieve was incredibly high in this film.