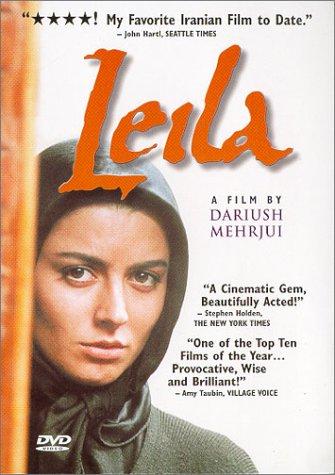 This is again a scenario based on true stories of our lives: I could not get pregnant after we had our first child and for 12 years we went to various doctors to find out why. Finally, after we gave up and made a film about a loving wife who cannot have children and encourages her husband to take a second wife, I became pregnant! I was pregnant during the whole shooting of Leila, and still attending to all the tasks and Jila was a big help, filling in my shortcomings whenever I was too tired, because at the same time I was working on the Calligraphers’ Society project…

This was a very strange love story, difficult for western feminist women to understand… Because I did not want it to end on a tragic mood, I wrote the final chapter: how after Leila’s three years of silence vows, her husband returns to her, holding the hand of a little girl…

I was constantly thinking of Bergman’s Cries and Whispers and LEILA was a dangerous and risky love story, so I decided to have a dominant red in Leila’s apartment, designed by my friend Mahvash Alemi. Her architecture is very close to my style, which is Iranian-Modern. For Leila’s parents’house we used our Darrus house as usual… always the locus of the firmest and warmest family in the film!

Leila is still being shown around the world and arousing a lot of discussions as to whether it is a misogynous or feminist film… For me and Dariush, it was a very feminist film.