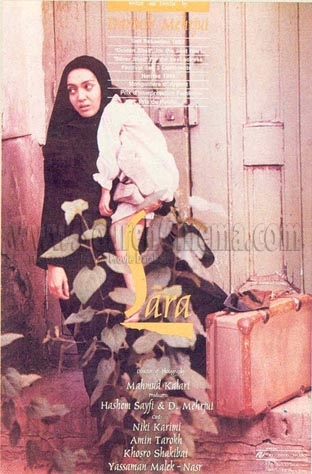 Sara was adapted from Ibsen’s A Doll House, but I also added many details to it. Since I was always the first person to read the draft scenario of Dariush’s films, I would make many suggestions to him and if he found them good, he would adjust. This was the first time we worked with Niki Karimi, a real doll, who became a close friend of mine, and I envisaged her as sewing bridal gowns and fitting them with pearls and jewels in her basement while her husband was asleep, and wearing thick glasses which she hid from husband. The pearl lost in one of her stews was a direct result of her poor eye sight, and I think it is one of the most poetic scenes in the film.

I think with BANOU, we began to make a series of very feminist films with Dariush, and fortunately SARA was not censored and went on to win many prizes, including Best Film at the San Sebastian Festival and Best Actress for Niki at Nantes’ Festival des Trois Continents.

Working with Mahmood Kalari as Director of Photography, I discovered how much our tastes were close to each other. Sara’s house was meant to be a dark-mood house, and we had chosen Mr Pesian’s house in North Tehran, while for the garden we used another house in South Tehran and for the entrance from a narrow street in the Bazaar section still another one! But overall, it was one of the easiest films for me to design.