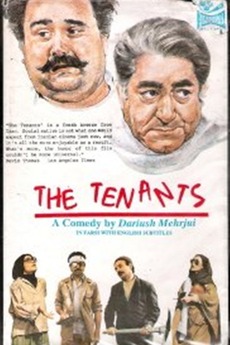 The Tenants was shot during the 8-year war with Irak, a period when the whole nation was so depressed and Dariush felt an impulse to make a comedy. It is a hilarious comedy based on a true story which happened to us: our landlord and all his family members died in a plane crash and my aunt and her family who kept our house for us when we were living in France, did not want to move out… This is the first film I designed for Dariush and Malina Fekri was my assistant. Our children were first graders and we were close friends. For the first time, I experienced making a film and all the difficulties involved, but overall it was a family affair and everything went well.

In a recent poll THE TENANTS was judged the best film made after the revolution, and it is still one of the most hilarious comedies ever made in Iran.